Listen to a Valentine’s Day interview with Catherine Ladnier on WGCH radio. 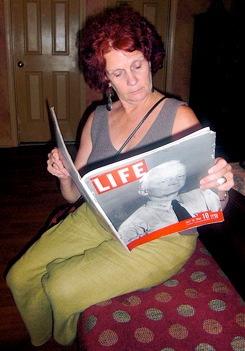 A native of Los Angeles, California, Catherine grew up unaware of the contribution of her family during World War II. Little did she know that the menfolk served in uniform overseas while the women did their part on the home front.

Catherine’s Southern mother, Eva Lee Brown, never talked about the War. Blessed with the gift of gab, Eva Lee talked about her family to her disinterested daughter for years. But not about World War II. For Eva, the only War was the one the South lost. The Civil War or, as she would say, The War Between The States. Southerners tell stories and Eva Lee honored that tradition but alas those stories “fell on deaf ears.” For the native Angelino, the present was all that counted.

All that changed as Catherine grew to appreciate the lessons history teaches and as she came to appreciate the storytelling traditions of the South. Catherine listened more attentively to Eva’s stories as Eva neared the end of her life. Eva Lee died on Mother’s Day, 2001.

To Catherine fell the task of handling Eva’s affairs. While cleaning out the old homeplace, the farmhouse where Eva was born in 1911, Catherine discovered hundreds and hundreds of letters, photographs, newspaper clippings, postcards, war ration books, telegrams and a myriad of mementos from that era long past. She packed all of Eva’s memories and shipped them to her home in Connecticut. Slowly, Catherine sorted through the trove of one life and started to piece together a story of life during World War II.

A confirmed theatre junkie, Catherine got the idea for a play, based on the letters, while working at the Metropolitan New York USO Memorial Weekend, 2004. Why not tell the story of these “ordinary” folks who faced extraordinary challenges during a time when the world was at war. Dear Eva has given birth to more stories of life during WWII.  Other families have rummaged through their attic and dug out those old letters and lent them to Catherine.  These voices have joined the folks of Dear Eva to create new stories.

A graduate of Mills College and Harvard University, Catherine hopes the lessons of Dear Eva will inspire another generation.

Paul has been a news professional for 35 years.  He has had a distinguished career as an associate professor of journalism at Quinnipiac University.  Paul assisted with Dear Eva and Love in a Time of War.  He holds degrees from Georgetown University and Columbia University.