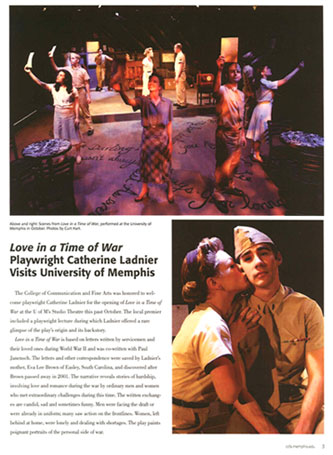 Image links to pdf of article

From the University of Memphis Magazine

Worthington Players & Love in a Time of War receive Awards

The NEPTA Award Winners have been announced! The Northeastern Pennsylvania Theatrical Alliance presents this annual event, held every spring, which highlights and honors the best of the best in Community Theater. The categories mirror those of the Tony Awards, including Best Actor and Actress in a comedy, drama and musical. There are awards for supporting actors, directors, and technical work as well. And of course there are awards for Best Comedy, Best Drama, Best Musical and Best Overall show of the year.

The Worthington Players, the artistic arm of The Shawnee Institute and whose “home stage” is The Shawnee Playhouse, received a total of 50 nominations this year!! The awards ceremony was held this year on April 9th at the beautiful Ehrhardt’s Waterfront Banquet Center in Hawley Pa.

All six of The Worthington Players Productions from 2010 were nominated. Congratulations to all of the directors, casts, crews and creative teams!! The winners are listed below by show and include some of the best local talent ever seen in Theatre.

Hamden, Conn. – The Historical Society of the Town of Greenwich will perform a reading of Act II of the play “Dear Eva” at 7 p.m. Thursday, April 17, in the Vanderbilt Education Center at the society’s Bush-Holley Historic Site at 39 Strickland Road. Quinnipiac University associate professor of journalism Paul Janensch and Catherine Ladnier of Greenwich wrote the play.

A conversation with Janensch and Ladnier follows the one-hour performance. Admission is $15. For more information, call 203 869 6899, ext 10.

“Dear Eva” is a nonfiction play based on real World War II era letters saved by Ladnier’s mother, Eva Lee Brown of Easley, S.C. Ladnier discovered the letters a few years ago and asked Janensch to write the play with her.

After Ladnier discovered the letters, she and Janensch turned the best of the letters into a play about average folks who lived, loved and fought during World War II. Janensch and Ladnier selected, arranged and edited the letters and wrote a connecting narrative but made nothing up.

“The time seems right for such a work,” Janensch said. “Audiences will draw meaningful comparisons between World War II and the war in Iraq. Back then, all Americans, including these letter writers, made sacrifices for the war effort. Today, sacrifice is limited to those serving in Iraq and Afghanistan and their loved ones at home. The rest of us go shopping.”

Organized by year from 1939 to 1946, the letters tell compelling intertwined stories: